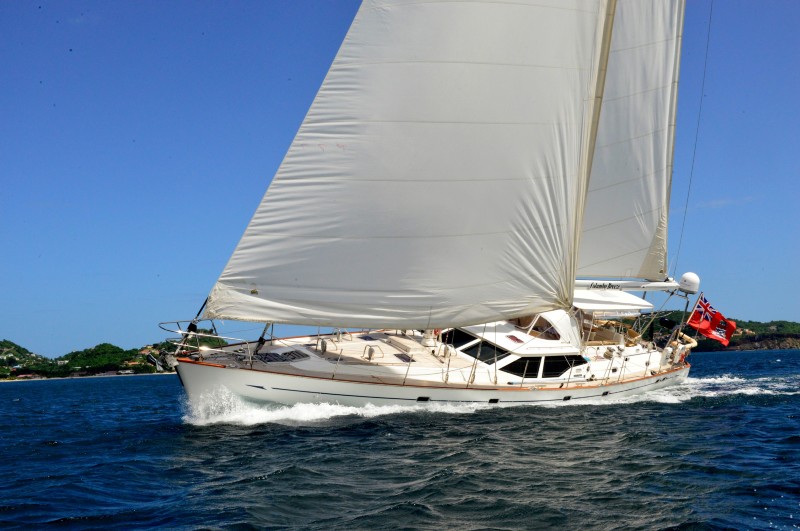 COLUMBO BREEZE is a customized Oyster 66 deck saloon blue water cruising yacht built in 2004. Her original owner specified many extras over the standard Oyster and Columbo Breeze is one of the very few shoal draft versions of this popular series. Her second owner greatly improved the yacht mechanically and replaced the teak decks in 2015. Her electronic equipment and air conditioning wereupgraded in August 2018.

Columbo Breeze is balanced and light on the helm with excellent light air performance. The split cockpit has a ‘big yacht feel’ with twin wheels and a spacious, protected guest cockpit with large fitted tables for ‘al fresco’ dining.

Columbo Breeze is now available on a lease/purchase/option basis and her asking price is a very interesting USD 895,000.

For more information check out http://stuartlarsen.com/en/yacht-detail/02-yacht-for-sale/63-columbo-breeze.cfm
> 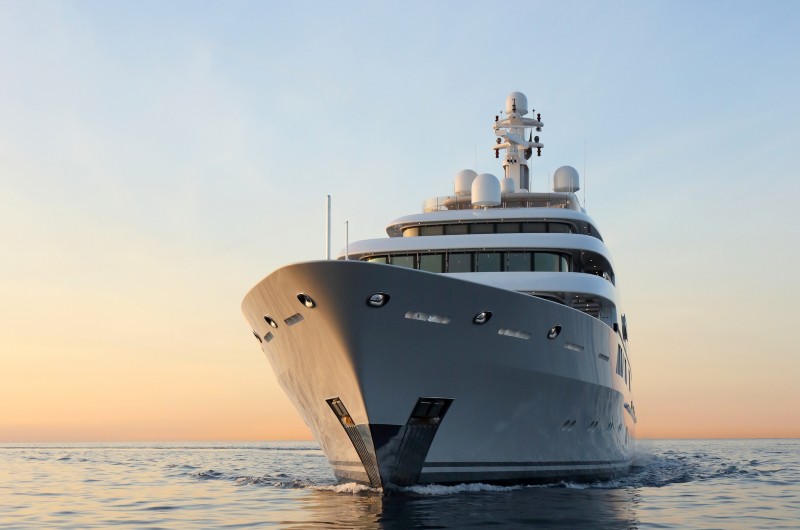 M/Y Saint Nicolas' asking price has been reduced by 15% from 55m€ to 46.7m€ excluding VAT. She is unquestionably the best deal in today’s market comparing:
- Yachts built since 2000
- Between 1500GT and 2500GT
- Price per Ton 25.408€/Tons
Saint Nicolas she has been maintained to the very highest standards by an experienced Captain of nine years standing and his highly skilled crew. She recently had an entirely new paint job, a technical overhaul and her 10 year Lloyd’s Class survey was just completed. Although she has always been used privately, she is MCA compliant.

Built by Lurssen to an Espen Øino design, her classic interior is by Francois Zuretti. Interesting features include a guest elevator serving all decks from Lower Deck to the Pool deck, a covered gym on the Sun Deck and a swimming pool with counter current jets and swim up bar. She accommodates 16 guests in 7 staterooms, including the Owner’s suite on the Main Deck and a VIP suite on the Bridge Deck.

Saint Nicolas is available for inspection  at anchor during the Cannes Yacht Show  and in the 2018 Monaco Yacht Show (26-29 September) on Quai Chicane, Berth F05. For an appointment contact Stuart Larsen by phone +1 954 328 6553 or at Stuart.Larsen@FraserYachts.com.
> 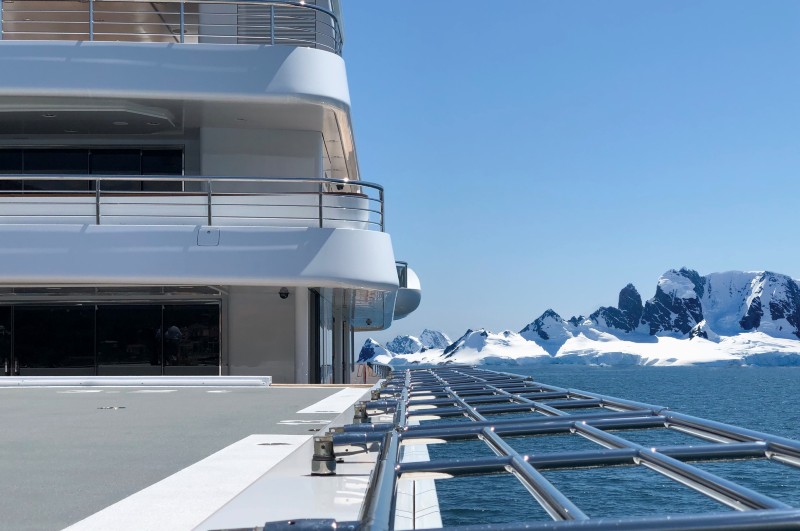 Planet Nine: The explorer combining elegance with serious cruisingArticle by Sam Fortescue in the September issue of BOAT INTERNATIONAL

Clink on the link for the full article.
> 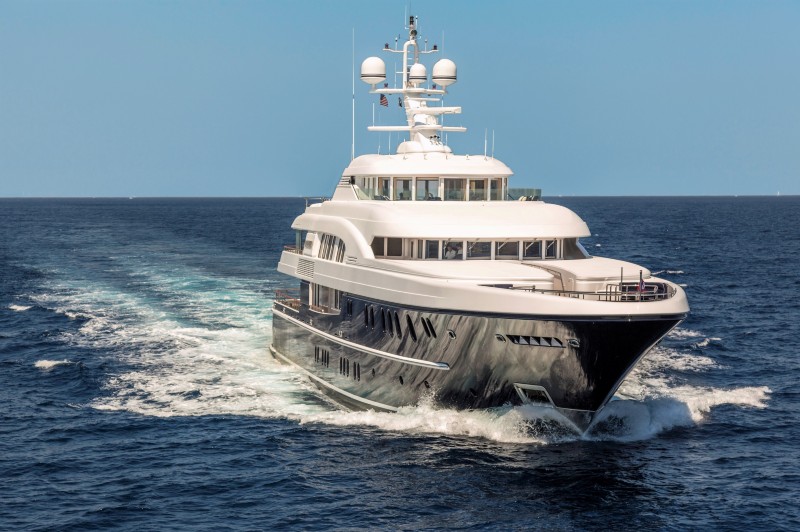 Stuart is pleased to announce his appointment as worldwide Central Agent for the sale of Podium, the 60m Lurssen delivered in 2007.

By any standard, Podium is a very special listing. Built by a yachting enthusiast for long range cruising in all climates, she is the result of the now legendary Oieno/Lurssen collaboration. She is a modern classic with sleek sporty lines, a well-thought out GA and versatile deck space. The panoramic lounge on the Sun Deck can be opened up or fully closed, depending on the weather.

Maintained and operated to exacting standards by the same Owner and Captain for the past 7 years, Podium underwent a multi-million euro  refit at Feadship, Makkum in 2015. Key equipment and machinery were serviced and a new paint job and interior refit ensured her superb overall condition, inside and out. Matthew Trustam oversaw the interior refit to refresh the original Zuretti decor. Although Podium is built to Lloyds and MCA, she has never chartered. 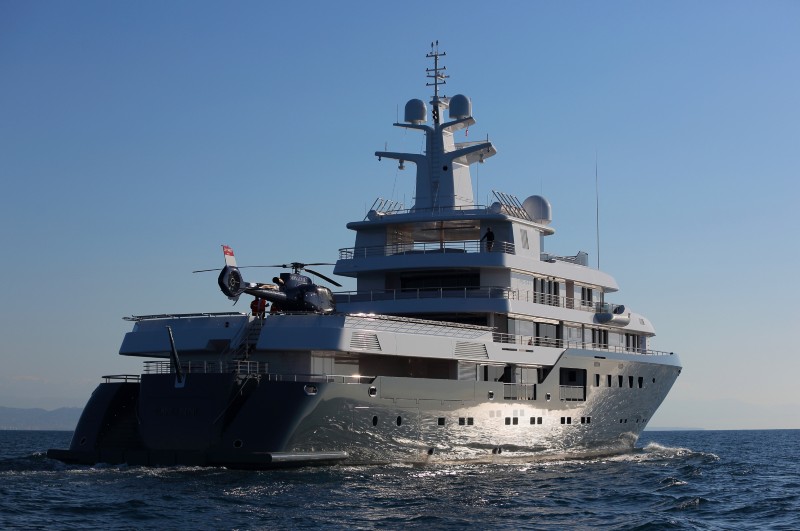 ON BOARD PLANET NINE A taste of future yachting

It’s not often that a truly innovative yacht comes onto the market. Planet Nine represents one of these very rare occasions. With the added bonus that, while being a unique blend of capability and versatility, she still looks and feels like a true yachtsman’s yacht.

Much has been written about Millennials and the future of yachting. If we look back to the 90s and the first generation of IT and hedge fund entrepreneurs, the majority moved into yachting only their after businesses had been consolidated. In a break with the past, and rather than buying into the glitzy champagne Med life-style, they focused on adventure yachting projects. They wanted yachts that could do things, go places and accomplish some form of new and exciting ground-breaking activity.

Millennials will undoubtably continue this trend – in a few years when their businesses claim less of their attention.  Planet Nine is a forerunner of this market. She has range and capability. She is intimate and versatile with numerous areas which can double as something else depending where Planet Nine is and how she is being used.  She is equally at home in hot and cold climates. She was built for sharing, planning and exploring far-flung regions. 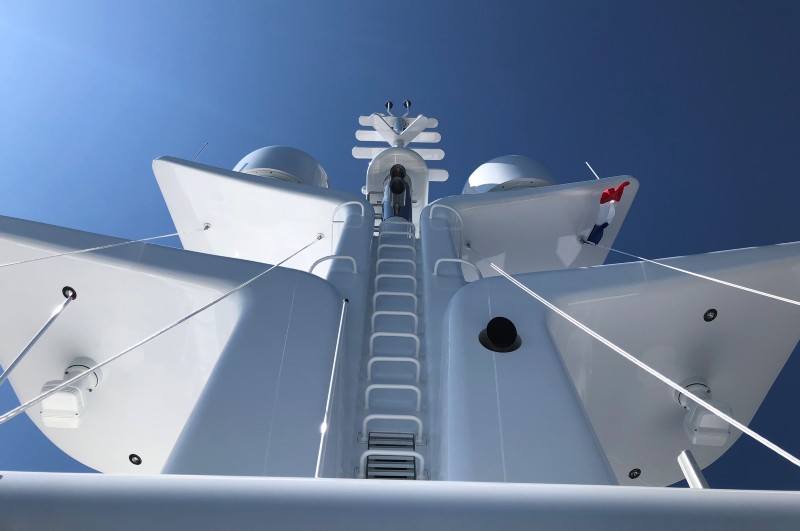 The recently delivered exploration yacht Planet Nine is in a class of her own. Designed by Tim Heywood with interior conceived by Tino Zervudachi and built by Fitz Germany, she is both elegant and imposing at 2,100 GT. Ice classed and outfitted with dynamic positioning, she also has a commercial helicopter landing pad with hangar below. Her facilities can handle two helicopters simultaneously.

Planet Nine’s interior is innovative and the layout versatile. Ideal for long range cruising in all conditions, her interior space adapts to arctic or tropical cruising. The inside-outside salon is designed for informal living and becomes an extension of the exterior when opened up.
The first of the two master suites is full beam with private access and a terrace, while the second master includes a planning room and library, which can also double as a cold weather dining room or a conference room for onboard business meetings.

Check her out at https://www.youtube.com/watch?v=2FGrmnJslEQ
> 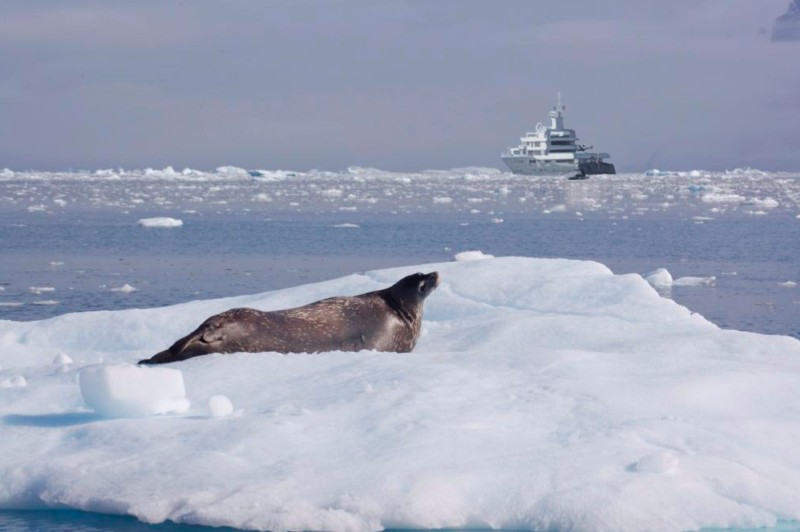 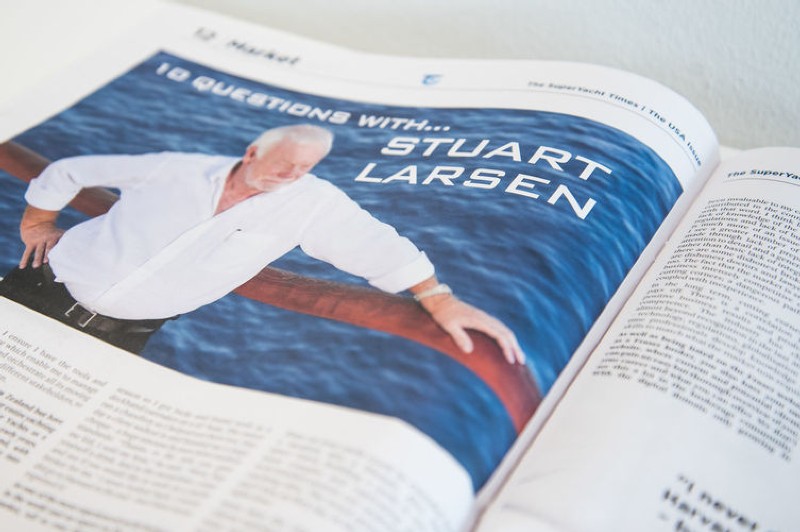 Ten questions with Stuart Larsen From the SuperYacht Times

New Zealand native and long-time Florida resident Stuart Larsen is one of the yachting world’s most trusted brokers - and that’s not an easy reputation to create. Even more difficult than establishing a name synonymous with integrity, efficiency and the ability to make the deal, is keeping that reputation polished, week after week, year after year. Having worked with internationally renowned brokerage firm Fraser since its very inception in the early 80s, and managing to maintain and refine a sparkling reputation over the years, Gemma Fottles caught up Stuart recently to hear the secret to his brokerage success. 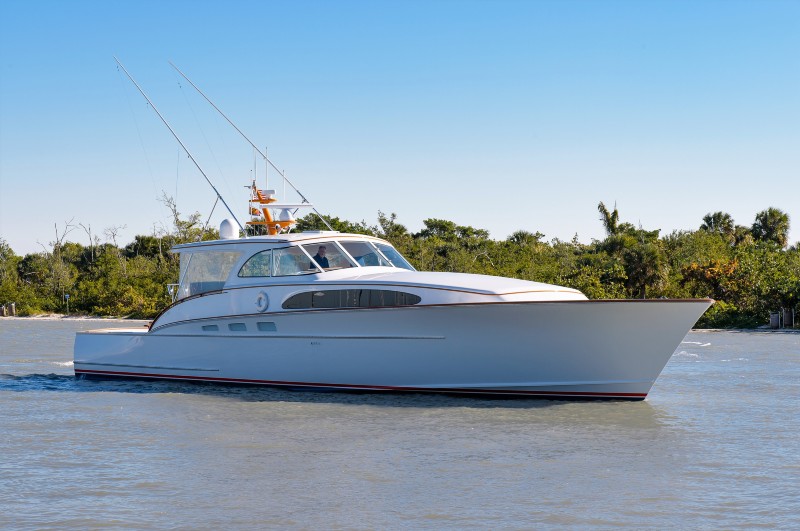 Stuart is pleased to announce the sale of the Sportfisherman Lizzy Bee.
Lizzy Bee is a 19.51 m / 64′1″ luxury motor yacht with cold molded hull built by Michael Rybovich in 2014. She is truly a work of art with ultra-modern design, building technology and performance. Ideal for fishing or pleasure, she is powerd by two Volvo Penta IPS-1200 diesel engines and cruises at 30 knots with a max speed of 36 knots.

She is extremely smooth, quiet and efficient. Joystick control system as well as traditional helm make operating comfortable and stress free in any environment. Lizzy Bee features a split four stateroom/three head layout with day head located off the salon and her book matched teak interior flows throughout with excellent use of space. Lizzy Bee has been renamed  Marilee. 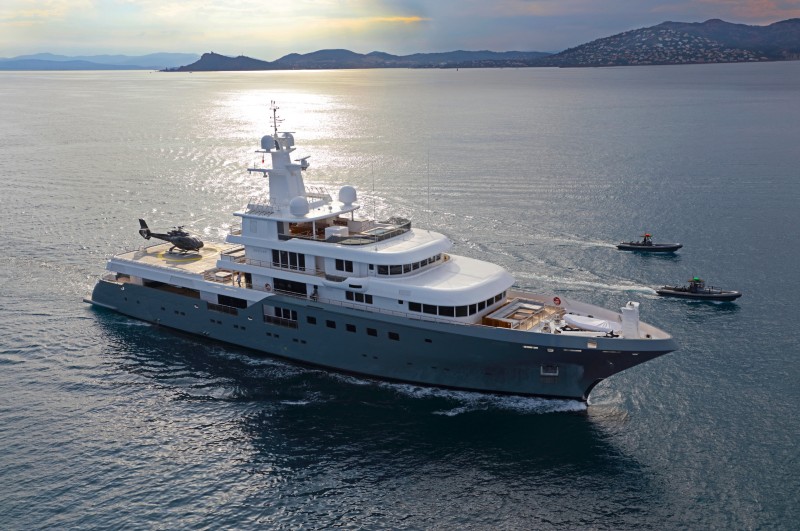 Planet Nine was delivered in late May and has just completed her maiden cruise.
In terms of what an owner could want, Planet Nine ticks every box.
In terms of capability, she is Ice Classed and equipped with a Commercial helipad and hangar (LY2 annex 6) with max landing weight of 8 tons. She can handle two helicopters and one of those can be stored in a hangar with hydraulic lift. High specification navigation and communications equipment is installed.

In terms of guest comfort, she is ideally suited to long range cruising with spacious yet intimate and cozy guest accommodations.  She is equipped with a state-of-the-art audio video system and a charming movie theatre.
There is a guest elevator serving lower, main, upper, bridge and sun decks. In addition to al fresco dining the sun deck has a pool and Jacuzzi with water retention tank.
The crew lift serves lower deck, main deck and upper deck. 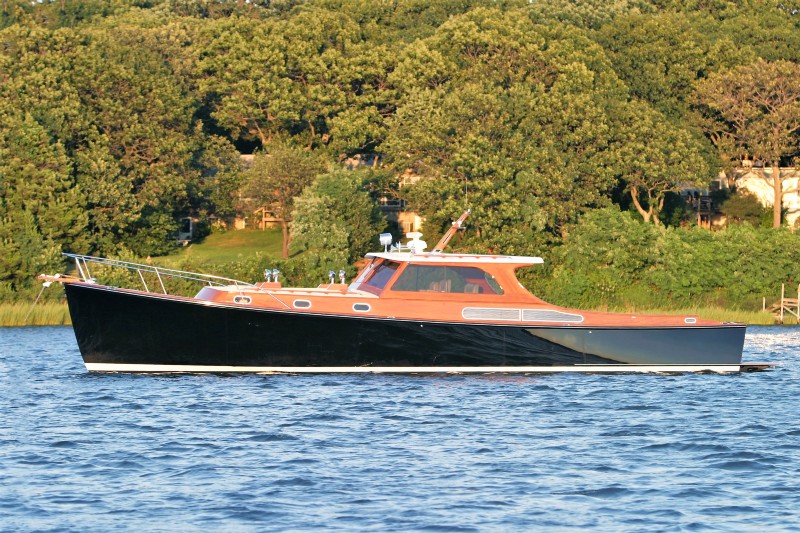 Stuart is pleased to announce the sale of Vitesse, the 50ft custom Downeast Boat designed by Doug Zurn, his third sale in 2018. Vitesse had been shown for the first time at the Palm Beach Yacht Show last March.

​Built in 2002 by CH Marine, Vitesse is a modern classic, combining the advantages of composite technology without sacrificing elegance or beauty. She has been kept impeccably, from clean bilges to first class varnish work.

Vitesse punches above her weight. She has ample on-deck living space and a well-designed interior with two staterooms positioned lower down in the forward section. The helm station has excellent visibility up and behind the main cabin and she provides speed and fuel economy as well as manoeuvrability at all speeds, fast or slow.
Vitesse was asking USD 1,550,000.
> 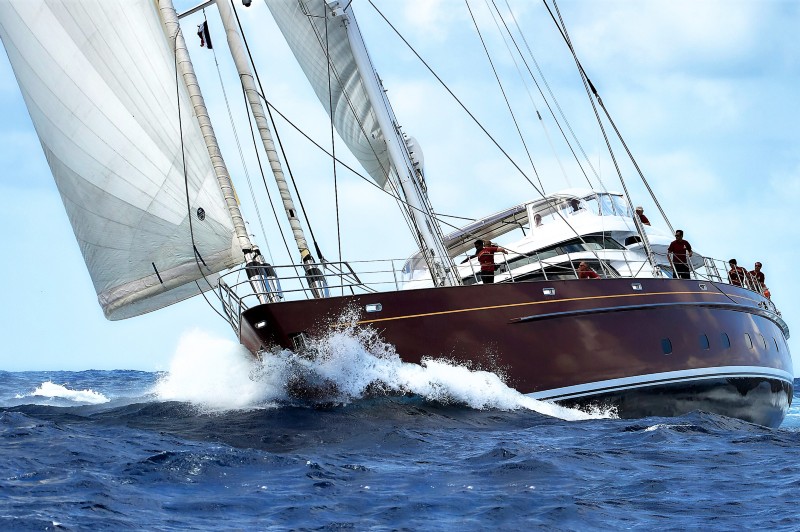 Stuart is pleased to announce the new Central Agency for GEORGIA, the 49m sloop buily by Alloy Yachts in New Zealand and christened at the stroke of midnight 2000, Georgia became the first superyacht of the new Millennium and established herself as a trailblazer for a new generation of sailing yachts.
With her 59m carbon mast and eye-catching burgundy-red hull, she was the world’s largest sloop at the time of her launch. Georgia won the Showboats award as the most innovative sailing yacht as well as the best sailing yacht over 38 meters.

Designed for ease of sailing with a minimal crew, safety and cohesive design was paramount in creating her. Georgia has five staterooms plus a staff cabin or gym and has unusually large windows in the main salon. Most of her captive sailing winches are hidden below deck and her centerboard draft allows access to shoal cruising areas.

Georgia is currently cruising on US East Coast and Canadian Maritimes and viewable by appointment. Her asking price is USD 15,950,000.