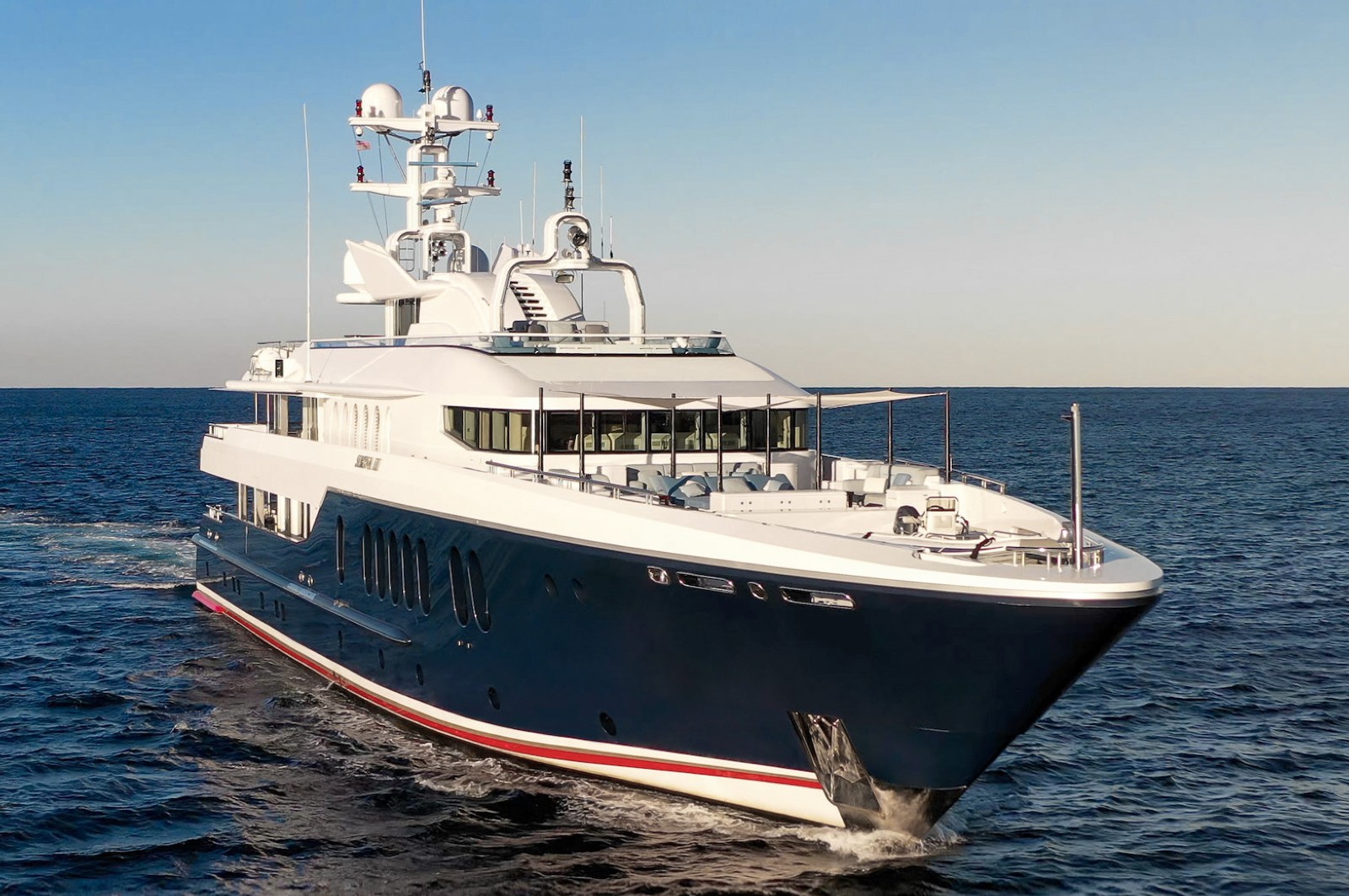 Stuart is pleased to announce his appointment as central agent for the sale of Sirona III, the 56.40m (185’) custom—built yacht delivered by Oceanfast in 2004.
One of the last yachts designed by the legendary Jon Bannenberg, Sirona III has a dashing profile and streamlined proportions enhanced by her royal blue hull which are as contemporary today as when she was launched.  Arguably the best Oceanfast built, Craig Beale coordinated the design team which included Sam Sorgiovanni who curated the crisp interior styling. The naval architecture was entrusted to Oceanfast’s owning company, the global shipbuilder Austal Ships, known to deliver performance, comfort, economy and reliability.

Built to Lloyds classification and MCA compliant, Sirona III has a steel hull and white composite (FRP) low maintenance superstructure. Although full displacement, her hull is relatively shallow and well suited for cruising the Bahamas. Sirona III is equipped with Caterpillar engines, Caterpillar generators, zero speed stabilizers and has trans-Pacific range at 10 knots. At top speed Sirona III can reach almost 15 knots and cruise comfortably at 12 knots.
Sirona III’s layout is versatile and optimizes interior and exterior space. There are a number of original outside entertaining areas: a great exterior forward lounge area on the bridge deck and a bar with al fresco dining on the sun deck. The sun deck also includes an indoor gym with a steam shower and day head. On the main deck the sliding glass doors of the formal saloon can be opened to create a giant al fresco entertaining area.

Sirona III’s crisp and contemporary interior is decorated in neutral tones with accents of color. Thanks to her large vertical windows, the overall effect is light and airy, with a modern art-deco feel. Sirona III can accommodate 12 guests in a bridge deck owner’s stateroom, four guest suites on the lower deck and a convertible stateroom/salon/TV lounge on the main deck. The four guest suites have extremely versatile bed arrangements such that SIRONA III can sleep up to 16 guests. She carries up to 15 crew.

Built by an experienced yachtsman and maintained in top condition, Sirona has only had two owners and has never been chartered.
Sirona III is asking USD 17,500,000. Currently she is lying in Fort Lauderdale and can be viewed by appointment. Please contact Stuart at +1 954 328 6553 or Stuart.Larsen@fraseryachts.com . Please note that Sirona III is not offered for sale to US residents while in US waters.