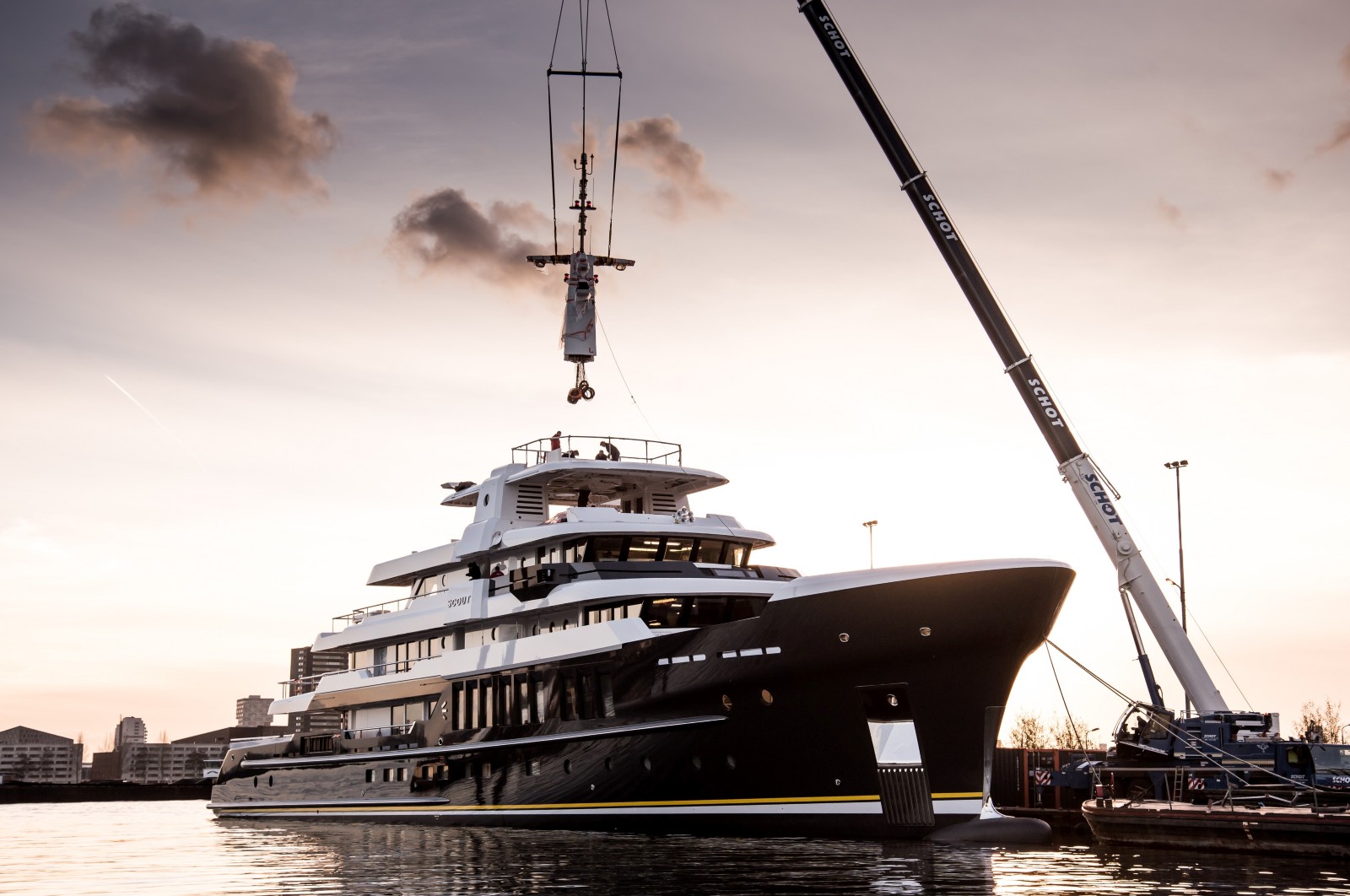 Hakvoort Shipyard is pleased to announce the successful launch of its 63.72-metre motor yacht YN249. Known as Project Brio during the build, the highly-anticipated project will cruise as SCOUT upon delivery to her experienced owners in Spring 2019.

Measuring 63.72-metres with a beam of 11.6 metres and a draft of 3.25 metres, SCOUT emerged from the Hakvoort shed in Monnickendam in North Holland on 1st December before being towed to Amsterdam for final completion. Amongst the works that will be completed in the Dutch capital is the installation of her mast, crow’s nest, radars, stabilizers and propellers.

Though construction of YN249 originally started under a different name, a change of ownership early on in the build process saw a complete change in direction for the steel and aluminum explorer yacht.  Hakvoort can now reveal that SCOUT features both interior and exterior design by Jonny Horsfield and his talented team at H2 Yacht Design, who worked closely with the owner to ensure the realization of a Dutch-quality new-build project that perfectly fits her owner’s taste and requirements. Diana Yacht Design is responsible for her naval architecture.

Speaking of some of the standout features on board, Jonny Horsfield says: “SCOUT has been an exciting project for the H2 Yacht Design and Hakvoort teams. The owner’s brief called for a rugged explorer style yacht intended to look like a conversion from a commercial vessel. We gave her crisp, distinctive lines and integrated forward sloping windows. We placed the tenders on the bow, leaving them exposed to add to the utilitarian aesthetic.

“There is a helideck and a forward observation lounge in addition to an expansive sun deck,” Horsfield continues. “It allows unobstructed views fore and aft which will be one of the focal points of living onboard. The whole design process was centered around a romantic idea of original ocean exploration and SCOUT’s design - inside and out - really reflects that. She’s a fantastically unique vessel.”

Powered by twin CATERPILLAR 3512C diesel engines, SCOUT is designed to cruise at 12.5 knots and will be able to reach a top speed of 14.8 knots. Combined with easy technical accessibility and minimum maintenance requirements, an autonomous range of 4,800 nm at 12 knots ensures that she will live up to her ocean-going credentials. Her Lloyds ice classed hull adds to her serious exploration attributes as a go anywhere world cruising yacht.

On board, she accommodates eight guests across four generous staterooms on the main deck, in addition to an impressive owner’s suite that is located on the dedicated owner’s deck above.  The lower deck features the crew accommodations consisting two staff cabins and nine crew cabins. Her captain's cabin is situated on the bridge deck.

Hakvoort Shipyard was introduced to the owners by Stuart Larsen and Josh Gulbranson of FRASER YACHTS who also organized the owners project team.

The successful launch of SCOUT marks a significant milestone for Hakvoort Shipyard. SCOUT will be the largest vessel in Hakvoort’s fleet upon delivery in a few months’ time, taking the title from the 61-metre motor yacht JUST J’S delivered in 2016.

Further details regarding YN249’s interior design will be revealed at a later date.
© STUART LARSEN 2021 &